In Astrology, we analyze the possibilities of someone’s marriage through the 7th house of the horoscope. We can determine every detail about the married life and the spouse through the planetary placements in the 7th house. The position of the 7th lord is also important. Different planets give different results with their sight in the seventh house. They may give good or bad results or even bless the native with a blissful or challenging married life with their specifications. So, the best marriage astrologer may now analyze which planetary conjunctions support a marriage. And how do we know whether the native will have a blissful or challenging marriage? Let’s find out 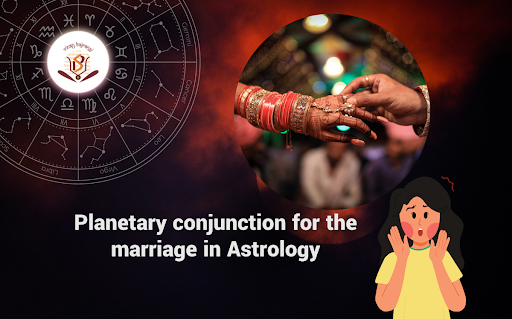 Planetary conjunctions to support a marriage

The 7th house is the main house of marriage in the birth chart. It is through the 7th house that the person may know whether they will have a good marriage or face problems in married life. The main planets for marriage are Venus and Jupiter. These are also the karaka of marriage in Astrology. These are also the highly benefic planets of the whole astrological cabinet. They form conjunction for a good marriage. Apart from these two benefic planets, other auspicious planets are Mercury and the Moon, but in the case of both these planets, some conditions need to be fulfilled to call them benefic planets. So, Venus and Jupiter are the major planets for the marital bliss of a person in a marriage horoscope.

Jupiter: Jupiter in the seventh house gives marriage between 24-26 years.

Sun: The Sun may cause delays and several ego issues that create a lack of harmony in married relations.

Mars: Mars creates Manglik yoga, which is detrimental to a happy married life. The person may face delays or inappropriate matches with Mars in the 7th house.

Rahu: The presence of Rahu in the 7th house gives sudden and the cast marriage. Here, the native may also marry in varied cultures or foreign land. There is a lack of compatibility between the partners. A feeling of suspicion may cause bitterness in relations.

Ketu: Ketu causes separation to the significations of the house it sits. Its placement in the 7th house may cause separation and divorce in the life of the native from the partner. There is less intimacy and sexual incompatibility between the partners.

Saturn: If Saturn is there in the seventh house, the person usually gets married at the age of 35 years. There are isolating tendencies in the life partner. The partner is too rigid to adjust, causing disharmony in relations. It is the planet responsible for problems in married life.

The influence of more than one benefit at the 7th house causes early marriage for a person. Venus, with other benefic influences, remains ahead in giving quick marriage to a person. If Saturn joins a benefic in the 7th house, the marriage gets fixed early, but marriage happens only after a break.

What causes delays in marriage?

The presence of malefic planets, as mentioned above, and other malefic yoga-like Manglik dosha, Saturn dosha, Rahu dosha, Angaarak dosha, Guru chandal dosha, and Kaal Sarp dosha, etc. cause delays in marriage. The planetary conjunction for delay in marriage generally involves the lords of the 6th, 8th, and 12th houses.

Even if there is no malefic influence in the birth chart, if Saturn is in exaltation, it may cause delays in marriage. In some cases, Saturn may even give a denial in marriage.

What if no planet is there in the 7th house

If there is no planet in the 7th house, then we have to see the placement and association of the 7th lord. The 7th lord also plays a crucial role in determining what type of married life a person will have. A detailed horoscope analysis for finding marriage issues concerns the 7th lord in the birth chart and D-9 chart.

The timing of marriage

Jupiter majorly causes a marriage to happen with its transit and yoga in the birth chart. Jupiter stays in a sign for one month, and during its stay, it affects the 7th, 9th, or Lagna of the horoscope. There is a good chance of a person getting married. But here, dasha and yoga in the kundli will also matter. Marriage counseling as per birth chart, gives important information regarding the married life of that person. One should visit a good astrologer to know what’s in the store related to your marriage.

Dr. Vinay Bajrangi is the best astrologer in India. His speciality in Career Prediction, Karma Correction, Kundli analysis, Love marriage, daily astrological prediction and many mores. To know more about him then visit Dr. Vinay Bajrangi or click https://www.vinaybajrangi.com/career-astrology.php